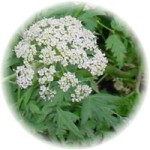 I went on an Osha (Ligusticum porteri) dig in the mountains with a few friends. Osha grows close to Aspen trees usually and can’t be found at less than 6,000 feet. My herbal mentor and I tried to find some Osha to dig the week before but our guide couldn’t find the plant. This time we brought a different guide with us and a local farmer. This guide was much better than the last, who took us straight to the plant, Osha. Osha is also known as Bear Medicine because bears are known to have a great love for the herb. They will dig up the root and eat it when they come out of hibernation. It is also said that the bears will roll over the root to cover themselves in its scent. The powerful herb is rumored to ward off rattlesnakes and bring mystical dreams and protection from negative thoughts if worn. Many Native American groups consider the plant to be sacred and would burn the plant to be rid of subtle negative influences. I heard that it was great for colds which I seemed to be catching a lot from the kids at my job. This is why I wanted some.

The Osha was right next to some Aspen trees. My mentor told everyone to be quiet and to honor the plants. She pulled out two very large Sage sticks and lit them. She quietly stood facing each of the four directions. She then told us to pick a plant. The farmer was eager to dig so that she could get the root swiftly and put it in honey to flavor it. The honey makes it medicinal. My mentor told her to put her tools away because the Osha doesn’t like metal. She told us that we would have to use sticks to dig up the root. The farmer was not pleased and began to question my mentor. “How can a root, not like metal? How can a root not like anything? It is a root and that is all!”

My mentor was not offended by the farmer’s questioning. She simply responded calmly,

“It may not make sense to you, but it is the way things are. We do not want to offend the Osha. Use the sticks.”

The others went to the Osha plants that they had chosen and I stayed with my mentor to help her dig. The work was not easy. The wind was cold and the sticks were not the best tools to dig into the soil but we all kept at it. Eventually we rubbed and clawed our way to the roots that gave off a strong odor. I like the crisp, woody smell of the plant. We retrieved a few pieces and put them in my mentor’s bag. My mentor cut up some raw Salmon and put in in the hole we dug as an offering to the space and the bears that might dig there. The color of the salmon, my hunger and the image of a bear digging up and devouring the Salmon made my mouth water, and I pictured myself as the bear.  We covered the hole and drove back to town. My mentor then gave me a few pieces of Osha. One of them was shaped like a little man. I brought all the roots home and put them in a cabinet.

The first night I had an intense dream of transforming and merging with bear. My aura pulsed and I saw flashes of light before me. I could see myself and the bear becoming one. I woke up before the bear and I fully merged. I felt no negative energy upon waking. My usual dramatic sleeping experiences were horrific and connected to subtle negative energy in the house. I would use my 6th sense to follow the evil vibes to a doll or statue it was attached to and remove it from the house.  This was different. All I could sense was great power but there was nothing scary about it. The force from the Osha Root kept me awake only because it was so intense. I placed the Osha outside until morning. I eventually learned that by wrapping the Osha Man in a white cloth, it was less intense and easy to sleep.

I’d had no experience with Osha. Even though I made mistakes with Osha I found it to be very forgiving. For example, one of the legs of the “Osha Man” was longer than the other. I tried to pull off a piece to make the legs even. The piece would not budge. The other pieces I had pulled off of the root came off so easily. Love emanated from each small piece. Being naïve in dealing with Elementals I foolishly grabbed the scissors and cut the difficult piece off. Instant pain and sadness shot through my entire being. My soul ached with sadness. The Osha Elemental clearly communicated to me that it was very offended and very much in pain. I apologized over and over again but the sadness would not leave. I dreamt every night of holding an Osha child while he cried for at least a week. Even through the white cloth the pain echoed through the night. After about two weeks, the pain vibration died down. I unwrapped the Osha, and the spirit of the Osha Elemental would walk around my house at night. I could sense it clearly doing this just as I could sense the negative spirits when they were around. However Osha was different. It brought nothing disturbing with it. At times I could feel it working on my subtle-body like a doctor as I lay in bed. Its presence was foreign to me and very non-human but for some reason I trusted Osha. I began to unwrap it for specific spiritual and medicinal reasons. For example, I would unwrap the Osha Man Elemental and ask him to help balance my aura and to help me get over sickness faster.

One of my dear friends brought me a little adorable doll from Mexico. The problem was that I would have night mares of a skeleton demon with a very long neck whenever it was in the house. I would be jolted out of my sleep by this horror and the evil energy would be emitting from the Mexican doll. I liked the doll so I decided to keep it in the car where I would not be in its attack range at night. One night I wanted to show someone the cool little doll and I forget to take the doll back to the car. When I went to sleep I had a dream that I was in an unfinished basement walking alone. I then saw its shadow. The shadow of its long boney neck was on the wall in front of me. I knew who this guy was immediately. I turned and there was the skeleton demon towering above me. It looked me into my eyes and sent a horrible vibe through my spirit. I woke up shaking. I knew where the doll was. I went downstairs to get it out of my coat pocket but a thought stopped me. What would happen if I kept the doll in the house and asked the Osha Man to protect me?  I began to walk back up the stairs to the Osha. Negativity and evil filled the house. I unwrapped the Osha and told it quietly to “protect my dreams”. Immediately the room was filled with its presence. I laid down and could sense the Osha guarding the bed. There was a bit of a fight. The Force of the Mexican Doll and the Osha seemed to fight for about 10 minutes before I felt the evil presence begin to dissipate. I felt a subtle hand grip my head and begin what I can only describe as fingers filling holes in my head with love. I could feel the negative spirit being completely blocked from my psyche. A minute later, the evil presence was gone completely. All I could sense then was a peace. I slept very well.

I woke up, thanked the Osha for its protection and wrapped it back in white cloth.

I then took the Mexican doll and left him at a crossroads.

I never imagined that I’d receive such a treasure while at a dig in the mountains with a guide, a farmer and my mentor. Now I keep Osha root with me wherever I go. I particularly like to work with pieces of the root that remind me of heads with eyes; or pieces of Osha that are in the shape of human bodies. I have found these special roots to be the most powerful for magical uses, and I take the time to meditate with my most special pieces. There are many great herbs to work with. I wholeheartedly believe that roots are the most powerful of the positive tools in Magick. Work with them and see which of these divine earth angels speaks to you!

Wheel Of The Year